Ipswich is one of England’s oldest urban centres. It has long been recognised as an emporium — a specialised, managed trading place of royal power within the eastern kingdom with royal input into trade and with commercial and diplomatic relations with the Frankish empire. Its origins are linked to a royal vill or centre (at Thingstead), close to which settlement developed. Its archaeology is of international significance, but sadly remains obscured by the previous lack of publication. Understanding of the role of emporia has developed considerably in recent years and new evidence — such as that from Stoke Quay — is crucial to furthering such study. Fuelled by an industrious pottery industry and international trade, it rapidly emerged in the 7th and 8th centuries as one of the first post-Roman settlements which could truly be described as a town.

Excavation of the 1.2ha site at Stoke Quay, immediately south of the River Orwell and adjacent to one of the ancient arterial routes leading into the town, was carried out by Oxford Archaeology and Pre-Construct Archaeology during 2012. The work was procured by Ramboll UK on behalf of ISG plc, in respect of a planning condition for development of the site by Genesis Housing Association.

An entirely unexpected discovery was the late 6th/7th- to early 8th-century barrow cemetery that stretched along a bluff facing towards the river. This burial ground suggests the presence of a community that chose to bury its dead in an open landscape on the riverside hills to the south of the river, in a manner reminiscent of prehistoric and Scandinavian influences. Other cemeteries surrounded the primary core of settlement to the north known as Gipeswic which lay at the junction of the Rivers Orwell and Gipping. The Stoke Quay site has considerable rarity value in that it includes distinct groups of Middle and Late Saxon burials. These have important implications for, inter alia, the transition to Christianity.

Investigations at Stoke Quay provide crucial new evidence about the urban fabric of Middle Saxon Ipswich, particularly since this is the first major excavation to have taken place to the south of the river. The remains demonstrate the setting out of plots, streets and buildings akin to the other wics (London, Southampton and York) and show strong influences from Frankia and Scandinavia. The associated pits, wells and cess pits yielded substantial finds assemblages and notable individual objects, providing some of the largest groups yet found in Ipswich. The town’s industries, such as pottery production, led to substantial trade links with the continent and it produced the first kiln-fired pottery made in Britain since the Romans on a quasi-industrial scale. This pottery effectively became a social marker for East Anglian influence, with the techniques and styles employed demonstrating links with northern Frankia and suggesting that individuals were brought in to establish the industry. The discovery of an exceptionally well-preserved Ipswich ware kiln at the Stoke Quay site is of crucial importance since it indicates that production was dispersed across a wider area of the town than was previously suspected (the other known sites, including the Buttermarket, lying on the northern side of the river). This has potential implications for settlement linked to craft specialisation.

During the Late Saxon and medieval periods, the site was dominated by the church and cemetery of St Augustine’s, the precise location of which had been lost for 500 years. The history of this parish and its little church have now been traced from the 10th century until their demise at the end of the 15th century (when the parish united with St Peter’s). Sited in one of Ipswich’s poorer areas, the population must surely have included a high proportion of ‘men of the sea’ as is suggested by the presence of reused boat timbers in many of the graves. Despite the poverty of its parishioners, the church developed in form (changing from an apsidal to square ended chancel), and saw the addition of a possible priest’s house. Its cemetery contained over 1,100 burials spanning the Late Saxon to late medieval periods. This is the first group of burials associated with a major English port yet to have been archaeologically excavated and analysed: the findings indicate that the group is osteologically and palaeopathologically distinct from other non-port populations. Scientific investigation shows that this was a mobile and mixed population.

Once the church had fallen from use, the site and its environs saw commercial and industrial use (including a cooperage and shipyard) that reflects the development of Ipswich into its modern form.
The wide ranging results of the analysis presented here provide clear potential for further studies that lie beyond the scope of the current work, although some pointers for future research are provided throughout this volume and in the concluding chapter. Taken as a whole, the archaeological and documentary evidence across many centuries bind together the recurring themes of trade, ships and the sea 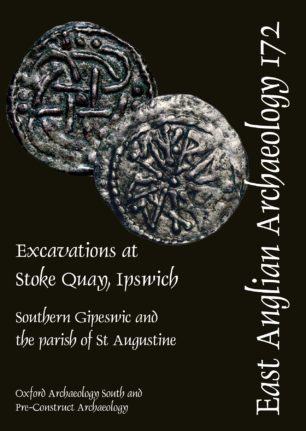