Burgh Castle is commonly identified with the Gariannonum of the Notitia Dignitatum, and one of the forts of the Saxon Shore. Green’s excavations suggest that it existed by the 340s AD with no earlier occupation on the site. He examined parts of the walls, bastions and internal turrets, as well as locating two buildings. A 5th-century hoard of glass vessels was discovered within a bronze bowl inside an iron-bound bucket, and this suggested occupation beyond the Roman period.

Burgh Castle has been identified with Cnobheresburg, mentioned by Bede as having been given by Sigheburt, king of the East Angles, to the Irish Saint Fursey for a monastery in the 630s. Although several oval huts, a 7th to 10th-century cemetery of 150 graves, and Middle Saxon pottery were found, they are not considered to be firm evidence for the monastic site — the question remains open. In the 11th century a motte was built in a corner of the fort with a timber tower on top. This was levelled by the 19th century. 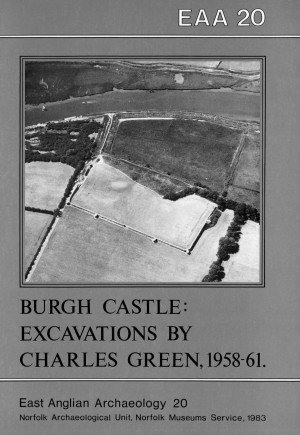