From about 680AD, North Elmham was a Saxon bishopric and, although unoccupied between the mid-9th to mid-10th centuries due to the Danish presence, continued until 1071, when it was abandoned in favour Thetford. The problems of the identification of the See with North Elmham are discussed, along with the history of the diocese and its bishops.
Excavations took place in that part of the park closest to the cathedral and containing the most earthworks. A sequence of features was revealed which starts in the Middle Saxon period, with buildings, boundary ditches and two timber-lined wells, and ends in the 19th century. Particularly important is the development of the Middle, Late Saxon and early medieval timber buildings. David Yaxley’s reconstruction drawings show how this part of the settlement may have looked at different periods.
11th-century skeletal remains from the cathedral cemetery are described in detail and, together with literary sources, form the basis for a vivid picture of contemporary village life.
Excavation results and the documentary evidence are combined to trace the evolution of the village and its plan, from the late 7th century to the present day. 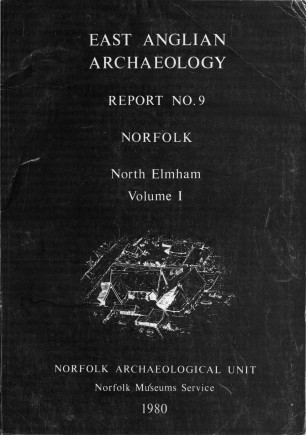