Excavations on the site of a Roman villa at Little Oakley in north-east Essex produced traces of prehistoric occupation, including early Neolithic flint-work and a large assemblage of later prehistoric pottery, although the nature of the Belgic occupation of the site is ambiguous.

In the Flavian period a large timber building was erected over a Roman sunken-floored structure interpreted as an agricultural building. A large fish pond and field ditches were also located to the east and south of the buildings. This was replaced in the 2nd century by a ‘corridor villa’ with masonry foundations, and in the mid 3rd century a bath block was inserted. To the south and west additional timber buildings were also constructed.

At some date in the 4th or 5th century the villa was dismantled and the rubble used to make platforms, probably for timber buildings. These rubble rafts contained handmade grass-tempered body sherds. Elsewhere on the site, Anglo Saxon occupation of the 5th century is demonstrated by pits and other features containing pottery, and an inhumation. Middle or Late Saxon handmade pottery was also found, but apart from a Saxo-Norman pit, the site appears to have been marginal. Ploughing probably began in the 16th century.

As well as describing the excavation results, this report also includes a detailed consideration of the evidence for the Roman villa estate, and the evolution of the villa estate into Domesday manors and medieval parishes. 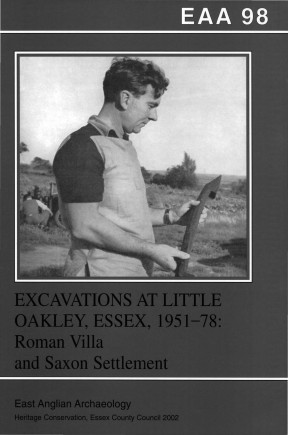