Working in advance of gravel extraction, Essex Field Group uncovered an unusual Roman aisled timber villa, small bath-house and other buildings.
The villa, in its ditched compound within a regular network of fields and enclosures, was probably established in the early 2nd century, and then modified and expanded in the early 3rd to early 4th century. At its peak in the late 3rd or 4th century, it was distinguished by four or more timber buildings, including an aisled villa and an aisled house. Both structures were adjoined by a small bath-house and there was also a granary and perhaps a workshop or storehouse.
Food remains from a wealthy household were discovered in a well in front of the villa, including pine nuts, olive stones, chestnuts, walnuts and cherries. A small assemblage of bird bones from local species such as sparrowhawk, plover, woodcock and thrush was also discovered. A large assemblage of carbonised macrofossils from the granary indicated storage arrangements at the time of its destruction. A breed of unusually large imported cattle was used to facilitate the ploughing of the heavy clay soils in the surrounding fields, and both the cattle and the granary indicate an emphasis on arable production. Large, well-stratified assemblages of late Roman pottery and tile will augment local finds synthesis.
Prehistoric activity at the site includes two Neolithic placed deposits, two Bronze Age ring-ditches, a small unenclosed Late Bronze Age settlement and an Early Iron Age building. A dearth of later Iron Age and Early Roman features indicates a hiatus in activity from about 300 BC to AD 120/30. The Roman villa was abandoned in the late 4th or early 5th century but the close association between Roman and post-medieval ditches implies some form of continuity within the landscape. 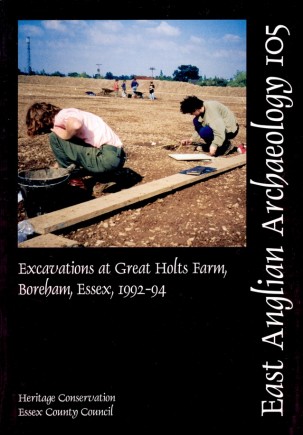