The core of this `small town’ was established before the conquest in AD43, and seems to consist of circular buildings, enclosed by ditches and a palisade. During the later 1st century a gravel road was laid out and insubstantial rectangular buildings were erected alongside it. This basic layout continued throughout the Roman period, with a droveway and partial field enclosures to the south. Pottery was manufactured at Hacheston between the later 1st and mid 3rd centuries, and the excavations also produced iron smithing debris and related structures.
The settlement continued as a market and manufacturing centre until the 4th century, when there was a marked drop in activity, and the place had become extremely impoverished by AD370. Early Anglo-Saxon structures were found just outside the Roman settlement.
The site was one of the first on which metal detecting was carried out, and the large assemblage of metal objects adds significantly to understanding both the chronology and the status of the settlement as a market and a manufacturing centre. 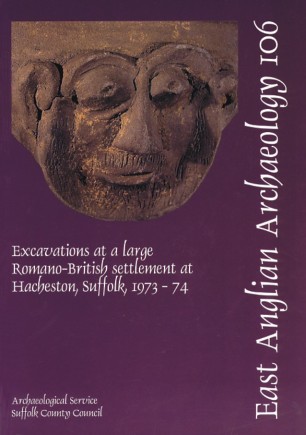