Excavations by the Cambridge Archaeological Unit near Kilverstone revealed an occupation sequence spanning the Neolithic to the post-medieval periods. Extensive Early Neolithic activity was evidenced by 236 clustered pits containing quantities of pottery, worked and burnt flint, charred hazelnuts and seeds and other material. The site is of national importance, with the number of pits discovered placing it alongside the type-sites of Hurst Fen and Broome Heath. A smaller number of Late Neolithic/Early Bronze Age pits, along with six cremations and a Middle Iron Age structure, attests to intermittent further activity. In the mid 1st century BC a settlement was established which was occupied until the 4th century AD.
Initially, the later Iron Age/Roman settlement is evidenced by boundary and enclosure ditches, and a number of pits, but the area then saw construction of a series of square and rectangular structures. In the later 2nd century AD, activity appears to have been focused around a large aisled building. In the 3rd and 4th centuries, these buildings were replaced by three circular buildings, one of which is tentatively interpreted as a metallurgical workshop (with a double-acting force pump associated). Outside was a series of pits containing a ‘blacksmith’s hoard’: a stack of pewter plates and a selection of metalworking and agricultural tools.
Activity at the site was again intermittent until perhaps the 6th century, when a small Anglo-Saxon settlement, consisting of at least ten buildings associated with sunken features and four post-built halls, was established. This was probably associated with a small number of burials to the south, four of which were furnished with weapons (though, unusually, none with jewellery), and there was a further urned cremation. No subsequent activity was recorded at the site except for medieval and later field ditches and a ‘Suffolk-type’ brick kiln probably associated with the nearby village of Kilverstone.

Reviewed online by Alistair Barclay for the Prehistoric Society, September 2007. 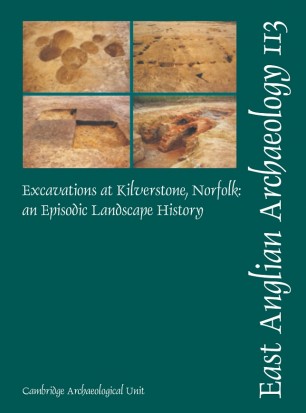