Excavations at Bloodmoor Hill by the CAU revealed a well-preserved and almost complete early Anglo-Saxon settlement, dating from the 6th to early 8th centuries AD, and a mid to late 7th-century cemetery, which lay within the settlement itself and included high-status female graves. The total excavated area exceeded 30,000sq m, and produced the remains of thirty-eight structures associated with sunken features (Grubenhäuser or SFBs), at least nine well-defined post-buildings (including one post-in-trench), four extensive ‘midden’ heaps or surface spread concentrations, and approximately 270 pits, as well as five hearth or oven bases. The site is remarkable for the amount of metalworking debris in evidence: over 160kg of metalworking slag, including hearth bottoms, crucibles and moulds, together with extensive collections of apparently scrap metal, which was found in concentrations indicative of distinct industrial areas. The site also produced large assemblages of Anglo-Saxon pottery, fired clay, animal bone and other materials. The structures and other features from the site are fully described, and the finds assemblages analysed by category, in order to characterise the status and nature of the settlement and its associated activities. The excavation methodology employed, whereby a proportion of features, including the surface deposits, were dug in spits and metre-squares, has enabled a detailed analysis of artefactual and soil movement across the site through time. Thus, the formation and growth of surface deposits, and the collection and dispersion of rubbish deposits from surface to subsoil feature, are outlined through a series of distribution plots. The end result is a multi-faceted study of one of the most complete early Anglo-Saxon settlements yet to be excavated, which concludes that the settlement may have been an early form of estate centre with associated high-status burial and industrial activity. 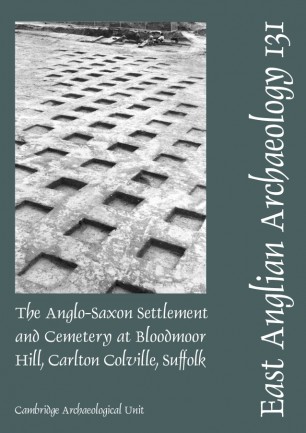