Excavations and a watching brief by Northamptonshire Archaeology at St Faith’s Lane uncovered part of a 10th- to 12th-century street frontage comprising incomplete remains of timber structures, pits and ditches. Finds relate to domestic occupation and a metalworking presence that may indicate a nearby forge. In the 13th century, after a period of decline and possible abandonment, the site was incorporated into the precinct of the Franciscan Friary. The Greyfriars soon began burying their dead in a cemetery laid out there, halting only to dig for minerals for a nearby building programme, probably in the 14th century. The burials have an unusual demographic profile which may relate, at least in part, to a Franciscan school of international renown. The site was fully enclosed by a precinct wall in the early 16th century, and after the Dissolution was predominantly garden until redevelopment in the 19th century. Fittingly, the site is now part of a school once more. 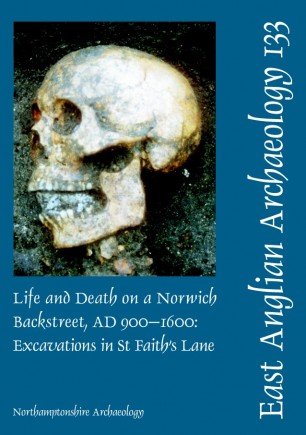