Important evidence for occupation spanning the late 1st century (Early Roman) to the 9th century (Middle Saxon) was found by CAM ARC (now Oxford Archaeology East) in 2002.
The initial phase of a Roman farmstead consisted of fragmentary evidence for a ditched field system and livestock enclosures, the layout being altered throughout the Roman period. Barns, trackways, wells and rubbish dumps were also evident, with environmental and artefactual evidence pointing to a predominantly pastoral economy. Both pottery and metalwork imply continuity of settlement at the site from the Roman to the Anglo-Saxon periods.
Early Saxon activity of the 5th–6th centuries is attested by seven sunken-featured buildings, a possible hall, ovens, pits and a contracted (or ‘crouched’) burial. Most of the buildings were deliberately set around a rectangular space, perhaps representing an extended family grouping within a much larger settlement. After a possible hiatus, the site was again used in the Middle Saxon period. The field boundary ditches were replaced by a large enclosure containing a post-hole building and another oven. Metalwork and associated debris in the backfill of an earlier building and nearby pit attest to ferrous working, possibly including steel production, and the gathering of scrap metal for recycling. The site evidently formed part of a Middle Saxon settlement such as a large village, engaged in craft activities and perhaps providing a local market. Its eventual abandonment was probably a result of the defeat of King Edmund at Thetford in 869 and subsequent settlement changes under Danish occupancy. 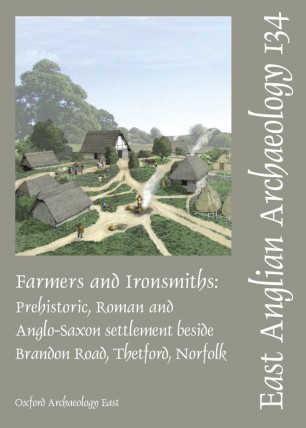