Excavations at Billingford were located on the periphery of a Romano-British small town the centre of which, as identified from aerial photography, lay to the north of the excavated area.
Ditched field boundaries and droveways, pits and post-holes, a road and an inhumation cemetery of the Romano-British period were found. The road ran from the centre of the settlement towards the 1st-century fort at Swanton Morley. This, along with finds associated with the military, suggests that during the early part of the Romano-British period the fort and town were inter-related.
The cemetery is the largest Romano-British burial ground excavated in Norfolk. Within the graves burials survived only as sand bodies and dating evidence was scarce, although there are indications that the cemetery continued in use into the early 5th century.
A pit containing a copper alloy torc and other ‘votive’ artefacts, and a dispersed coin hoard dating to the late 3rd century were recorded during a watching brief on further areas of topsoil stripping.
Post-Roman activity, although not extensive, was significant. Four Early Saxon buildings were excavated, three of post-hole construction and the other a sunken featured building. Evidence for Middle Saxon iron smelting was found, including a ‘north-German-type’ furnace. 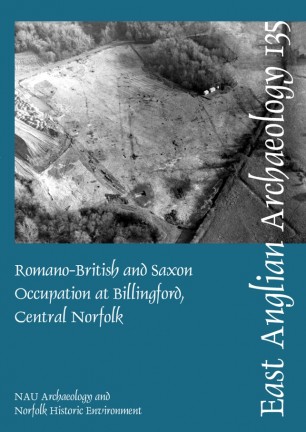