Combined in this single volume are the results of published and unpublished excavations in Roman Great Chesterford, and an account of the origins and development of the town. The principal archive sources were the antiquarian excavations of the mid-19th century, mainly by the Hon R.C. Neville; rescue excavations by Major J.G.S. Brinson in the late 1940s; and the Great Chesterford Archaeological Society excavations of the 1970s–90s.
Great Chesterford sits on the north-western boundary of Essex in the valley of the River Cam. It is a strategically important site which commands the entrance to the Fens through the gap in the low chalk hills, as well as a number of significant routeways and the tribal boundary between the Trinovantes and the Catuvellauni. The town has its origins in the late Iron Age. A rectangular timber shrine which pre-dates the later Roman temple has been identified 1km to the east of the town. The settlement evidence is limited; evidence from burials being more widespread. In particular, the Aylesford-type bucket burial from Bramble Shot suggests a local leadership of considerable wealth and social standing.
The earliest evidence for the Roman period comprised the pre-Flavian fort, a single ditch and bank enclosing a rectangular area of about 13.4ha. It is not known whether the fort was built prior to the Boudiccan revolt or in response to it; what is clear however, is that it was in use for only a very short time. It was apparently deliberately dismantled, although a number of its internal features were incorporated into the town that grew up on its site.
A geophysical survey of the town has identified much of its layout. In the centre was a large market place flanked by substantial masonry buildings which may have included a mansio or a macellum and a temple. Masonry structures have been identified along the main north road, including the villa and the ‘tax office’ excavated by Brinson. Six principal roads led into the market place. The remainder of the area was sub-divided by lanes with a regular planned appearance on the western side of the town. The majority of the buildings would have been timber-framed, and several examples have been excavated. Extensive areas of pitting are also visible on the survey. There is some suggestion that the town was enclosed by a bank and ditch, which was replaced in the later 4th century by a substantial flint rubble wall, the construction of which involved the clearance of a number of buildings and the backfilling of earlier features.
Outside the town were extensive cemeteries and evidence for extra-mural settlement, which in many cases overlapped in extent. A second walled enclosure has been identified to the south-west of the main town area. This contained evidence for both settlement and burials as well as a number of pits with depositions of a ritual nature. It is suggested that this area may have formed a focus for religious activity. The cemeteries encircling the town exhibit a change in burial practice mirrored elsewhere in Roman towns, with the later examples comprising interments laid out in an east–west direction with few or no grave goods; it is possible, but not proven, that these may represent Christian burials.
To the east of the town, the late Iron Age shrine was replaced by a classic Romano-British square-in-square temple enclosed within a precinct within which was a series of very large pits containing the bones of numerous animal sacrifices. Goods were being manufactured for deposition at the temple, including votive leaves and non-functional brooches. A silver face mask from the site depicts a male deity with extravagant facial hair and possible horns; comparisons can be drawn with the British and Celtic god Nodens and the Romano-British versions of Neptune, Mercury and Silvanus.
It is suggested that Great Chesterford took on a more significant role as a centre for local administration and possibly as an inland component of the Saxon Shore defences in the 4th century, culminating in the construction of the walls. The fate of the town at the end of the Roman period is not clear. An extensive Anglo-Saxon cemetery (450–600) has been excavated immediately to the north of the town, and there is some evidence for individuals using Romano-British burial practices being included within that cemetery. 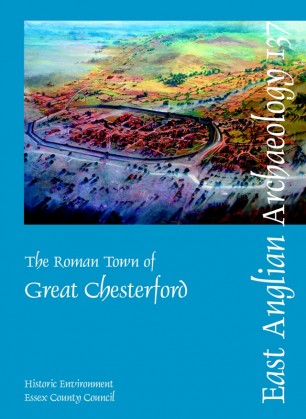