Between 1998 and 2001, Albion Archaeology carried out a series of archaeological investigations in advance of development at Marsh Leys, on the outskirts of Bedford. The vast majority of the archaeological evidence was associated with two Romano-British farm sites c. 400m apart. The farms varied in size over time, ranging from c. 1ha to 3.3ha. Their layout, morphology, chronological development through three distinct phases, mixed farming economy and environment were similar, although subtle contrasts were identified.
The earliest farmsteads (1 and 2) originated prior to the Roman Conquest and appear to have been largely unaffected by it. In their earliest form they comprised small, individual ditched enclosures adjacent to areas of unenclosed domestic activity that included roundhouses. One of the ditched enclosures contained a square building which has been interpreted as a shrine. Cremation burials were found on the periphery of both farmsteads including a small cemetery of seven graves. Substantial changes were made to the layout of both farmsteads around the middle of the 2nd century AD when rectangular systems of enclosures/fields were created (3 and 4). This change is a common occurrence on farmsteads in the region but generally occurs at least half a century earlier than it did at Marsh Leys. Domestic and non-domestic enclosures were established, usually attached to major boundaries or trackways. In places, the new system incorporated the earlier enclosures, suggesting a degree of continuity with the previous phase of occupation. The farmsteads’ domestic foci were characterised by the presence of buildings, pit and post-hole groups, wells, water pits and large quantities of domestic debris. These remained in the same broad location as the farmsteads were altered and developed. The discovery of up to five rectangular buildings is significant because they are rarely found on farmsteads in the region. A small number of human burials and ‘structured’ deposits were identified, nearly always away from the domestic foci. The final farmstead (5) was established in the late 3rd or early 4th century and was characterised by a new enclosure and two new fields. The absence of late 4th-century coins may indicate that the farmsteads at Marsh Leys had been abandoned by the middle of the 4th century.
The location of the farmsteads on low-lying land close to Elstow Brook favoured a mixed farming economy, as evidenced by the animal bone and charred plant assemblages. The majority of the evidence for non-agricultural activities is associated with iron working, specifically smithing. Almost all the metallurgical residues were from the same location within all phases — the northern part of one of the farmsteads away from the domestic foci. This indicates that smithing activity, with skills presumably handed down from generation to generation within the same community, took place over several hundred years. There is also limited evidence, mainly from the artefact assemblage, for textile, wood and bone working, but there was no evidence for pottery manufacture. The absence of the latter is difficult to explain given that both farmsteads were situated on Oxford Clay and kilns are commonly found on contemporary settlements in the area. It is possible that the occupants of some farmsteads specialised in a specific craft, e.g. blacksmithing at Marsh Leys, with the need for other goods met through purchase or exchange. 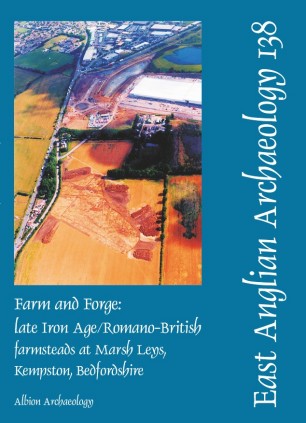