The Anglo-Saxon cemetery at Shrubland Hall Quarry, Coddenham, was unknown until its discovery during investigation of an Iron Age site. The fifty Anglo-Saxon burials found were possibly the remains of a larger cemetery, extending an unknown distance to the west, the other graves being lost to earlier gravel extraction. While most of the fifty burials lacked grave-goods, or had modest accompaniments, several graves included elaborate grave-goods, some imported, and typical of the later 7th and early 8th century.
The cemetery lay around a probable prehistoric barrow, and barrows were raised over three of the burials. Coins found in two graves give a general date to the cemetery, placing it in the later 7th and early 8th centuries. The grave-goods are mostly typical of the mid-7th to early 8th century, when a distinct range of object types was deposited. The more lavishly provided burials included two in wooden chambers, one of them (Grave 30) a bed burial within a chamber, over which was placed a curved wooden cover, the other (Grave 1), partly removed by earlier quarrying, containing a seax and imported bronze bowl.
As well as the coins, finds included two seaxes, an inlaid iron buckle, a fauchard, two shields, some fragments of a hanging bowl, two other bronze bowls and the remains of three combs. Dress fittings included two silver ‘safety pin’ brooches, typical late 7th-century beads, and a pendant reusing a Frankish gold coin of Dagobert I. In particular, the affinities of the assemblage lie with contemporary cemeteries at Boss Hall and Buttermarket in Ipswich, at Harford Farm in Norfolk, at Burwell and Shudy Camps in Cambridgeshire, and further afield in Kent, Yorkshire and Frankish areas of the continent. Two of the bronze bowls add to a corpus of distinctive imported vessels, whose distribution emphasizes the long-distance connections of contemporary material culture.
Local patterns of settlement also provide a context for the cemetery, which may be the burial place for a high-status community inhabiting a site in the valley below. Coddenham lies close to the Roman road system and to the site of the Roman town of Combretovium, in the Gipping valley to the west. Metal-detecting in the adjacent parish of Barham has recorded another ‘productive’ site, next to the medieval church, with finds similar to those from Coddenham. 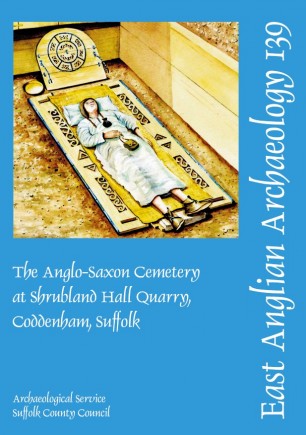