Excavations of 1958, 1959 and 1967 on the round barrow at Trowse produced evidence of four probable graves, three radiocarbon dated to the 2nd millennium bc, The barrow is related to known Neolithic and Bronze Age sites and other cropmarks in the area.
An undated linear earthwork crossed Horning peninsula, from the River Bure to Horning marshes. It was recorded in the last century, and recent fieldwork, with aerial photographs, has been used to suggest reasons for its existence.
The eight best-preserved deserted medieval village sites of Norfolk are described here. There are detailed descriptions of the earthworks and ruined churches where they exist, along with all the documentary evidence.
A medieval hamlet at Cotes, in the parish of Sporle, is described. The documentary evidence shows that one holding within it was called Petygards and it is suggested that Cotes was a late medieval colonisation on the edge of the common.
The remains of several medieval merchants’ houses in Queen Street and King Street, King’s Lynn are described. Architectural descriptions are accompanied by the results of archaeological investigations. 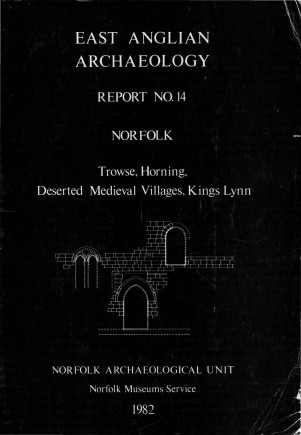