The site, along Hinxton Road, occupies a strategic location on a natural chalk knoll overlooking a crossing of the River Granta and one of the suggested routes of the Icknield Way. The hilltop was the site of an early Iron Age ‘crouched’ inhumation burial. During the middle Iron Age a probable ritual structure was accompanied by human and animal inhumations, while numerous cylindrical grain silos were backfilled with ‘ritual’ deposits and possible feasting waste. A stock enclosure and further storage pits were dug on the lower ground, the disuse fills of which contained additional evidence for the deposition of possible feasting waste and ‘special’ deposits. During the late Iron Age the higher ground was defined by a series of ditches that were repeatedly redug, surrounding a short-lived timber-framed rectangular shrine and a burial ground which continued to function into early Roman times.
The late Roman period saw the construction of a substantial drying building, followed by a break in habitation until the early Saxon era, when the lower part of the site was occupied by a small farmstead. Three sunken-featured buildings and a post-built structure yielded a range of domestic artefacts associated with textile working. In 1086 the Domesday survey recorded at least three manors in Duxford and by 1200 it was a bi-focal settlement with two parish churches. The lower part of the site was probably in the ownership of the church of St Peter. A substantial mortar mixer was constructed, perhaps to aid repair works on the church. By the 17th century there was a rectory on the site, replaced in 1822 with the building that remained in use until 2002. 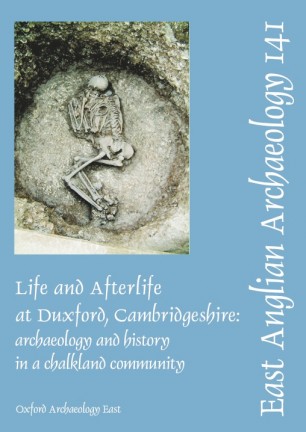