This volume is the first in a series that will cover the extensive and significant archaeological deposits recorded at Flixton quarry on the south side of the Waveney Valley. Volume I is largely funded by an ALSF grant, and describes remains of prehistoric, Late Iron Age/Early Roman and Early Anglo-Saxon date.
The prehistoric archaeology is dominated by three monumental structures. The earliest, dating to the Late Neolithic, is a post-hole circle 18m in diameter, with an entrance to the north-west and containing a rectangular post-hole structure. Various interpretations are explored including the possibility that astronomical alignments were invested in the monument. The site of the Late Neolithic structure was subsequently overlain by an Early Bronze Age unurned cremation and its surrounding ring-ditch. A second ring-ditch subsequently became the focus for burial in the Early Anglo-Saxon period (Flixton I), and its central mound was re-used as the site of a windmill in the later medieval or early post-medieval periods. An enigmatic palisaded enclosure, describing a near-perfect circle of 27m diameter, was dated by pottery to around the time of the Roman Conquest. Various possible uses of the post-hole circle have been explored, and it may have been associated with a rectangular post-hole structure of similar date that was recorded in a later phase of the quarry.
The Anglo-Saxon period is represented at Flixton by two burial grounds (Flixton I and II) and a settlement; the cemeteries are described in this volume. Flixton I seems to have been a small plot associated with a prehistoric barrow: only one grave has been excavated, but metal-detected finds indicate some further burials. Flixton II was larger and at first contained within a rectangular plot close to another barrow. Fifty-one of an estimated 200 or more graves have been excavated there. Burial at Flixton II shifted southwards on to the barrow itself, where eleven more graves were identified. The date range of the excavated graves in Flixton II is c.500 AD to the middle of the 7th century and the plot at Flixton I is likely to have been contemporary with its earliest phase. The material evidence has been used as a base from which to discuss the social make-up of the community who buried their dead there. The role of this community in the southern marches of the former Iceni territory has also been explored. Later volumes will cover excavations elsewhere in the quarry, revealing Neolithic and Bronze Age funerary monuments, occupation evidence of prehistoric, Roman and Early Anglo-Saxon date, and a large assemblage of finds. More recent remains include those associated with Flixton Hall and its surrounding parklands, and evidence for First World War training activity. 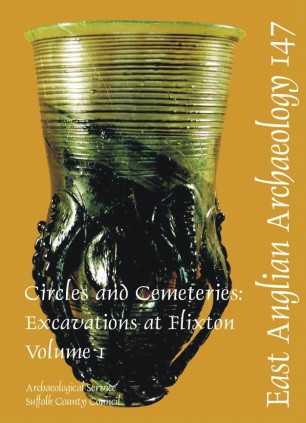