An area of 1.5ha was excavated at Harston, Cambs, by Archaeological Solutions Ltd. Substantial remains of early to middle Iron Age and early Anglo-Saxon date were uncovered, with more limited earlier prehistoric, Roman, medieval and post-medieval evidence. In all periods, the site has been open, grassy floodplain east of the Rivers Cam or Rhee with an underlying geology of chalk in the west and gravelly clay to the east. The site has only been ploughed in recent times.

A small barrow and discrete pits were dated to the later Neolithic or Bronze Age. In the early to middle Iron Age concentric circles of posts were added to the barrow, and a single crouched inhumation was buried nearby. A settlement of five roundhouses, four-post granaries and possible rubbish pits neaby was set within a wider landscape divided by segmented ditches and fence-lines. A structural posthole was dated 360 to 200 cal BC. Contemporary with this settlement were 189 grain storage pits, mostly located on the chalk belt parallel to the River Rhee. Many of them contained ‘special deposits’ of human and animal remains, and pottery vessels. Most of the adult humans were female; adults and juveniles were mostly located in storage pits within the chalk belt, and infants were generally in pits to the east, on gravelly clays. One complex burial was dated 410 to 370 cal BC. This phase produced a significant assemblage of Chinnor-Wandlebury pottery and a substantial collection of animal bone, including rarely-found wild species.

In the early to middle Anglo-Saxon period, three sunken featured buildings, three ancillary structures and numerous discrete and clustered rubbish pits were set within an open landscape of parallel, linear ditches. One SFB contained a foundation deposit of a lapwing skull radiocarbon dated to the 6th/7th century. Before occupation ceased, the dispersed settlement was enclosed by a bank and ditch. Finds from the settlement include wool-processing and weaving equipment, dress fittings and personal effects, and quantities of domestic refuse, including a substantial assemblage of pottery, particularly Ipswich ware, and animal bone.

Later activity at the site included quarry pits, and a rutted trackway which ran parallel to the river, possibly leading northwards to the mill. 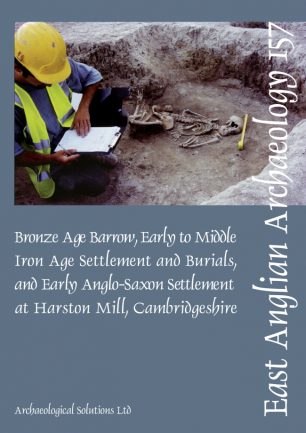