This synthetic and analytical study of medieval pottery examines evidence for pottery manufacture and its distribution and use, through the study of documents, publications, excavated assemblages and museum collections. It focuses on the post-1974 County of Cambridgeshire, including the historic counties of Cambridgeshire and the Isle of Ely, Huntingdonshire and the Soke of Peterborough. The period under study is generally the Middle Saxon to the end of the medieval period (c. AD 650 to AD 1500).

The Middle Saxon pottery of this region can be divided into four groups; hand-made domestic wares, Maxey-type wares, Ipswich wares and European imports. The study has not altered this interpretation, but it has become clear that hand-made pottery utilising glacial clays persisted longer in the west of the region, in an area of Mercian hegemony, compared to the situation in those areas associated with East Anglia to the east where quartz-tempered pottery became more dominant. This contrast is also seen to a degree in the relative distributions of Maxey-type wares and Ipswich wares. Late Saxon pottery supply was found to be principally that of the East of England ‘triumvirate’ of Late Saxon wares (St Neots-type, Thetford-type, and Stamford ware), with evidence that Thetford-type ware appeared first in the county, perhaps as early as AD 840 at Cambridge. Thetford-type wares were principally from the production source at Thetford, whilst St Neots-type wares were hard to divide into petrological sub-groups, but there were some indications of different northern and southern fabrics, whilst a fabric with an added sand temper was present alongside new vessel forms as a ‘Developed St Neots-type ware’ from perhaps the later 11th century. At Huntingdon, evidence has been identified for production of a further Thetford-type ware, probably in the 11th century. St Neots-type wares appear to have been moved easily into the upland part of the county and they were also distributed across most of the fenland via the river systems that had their outfall at Wisbech at that time, but they rarely reached upland Norfolk. Thetford wares were moved into the fenland along the Little Ouse river that was also part of the main system of fenland waterways. Stamford wares were not supplied in bulk to the region as whole, but were dominant as both finewares and in the utilitarian assemblage within the Soke of Peterborough.

Several early medieval pottery types have been newly identified in south Cambridgeshire (South Cambridgeshire Grog-tempered Sandy ware, South Cambridgeshire Smooth Sandy ware and South-west Cambridgeshire Sandy ware) and these were differentiated from a large volume of early medieval wares from Essex that were also present in the later 11th and 12th centuries. An early medieval ware was also manufactured at Huntingdon (Huntingdonshire Early Medieval ware) for which a corpus of types is presented. This was also present at Ramsey but did not have a distribution extending across the whole fenland. Fabrics indigenous to that county were present on the Norfolk fen edge, whilst there is as yet no evidence for pottery manufacture at Ely before the 12th century, but some early medieval forms are present in Ely fabrics. In the west of the study area St Neots-type wares were still common, but in developed forms, whilst by the later 12th century on the fen edge, Ramsey was receiving significant volumes of pottery from Ely, suggesting that new waterways linking the Ouse–Cam rivers with the Nene system were by now in existence. At Peterborough, Stamford ware continued to be common in both town and country, although from sometime in the 12th century a shelly ware started to be made locally (Peterborough Shell-tempered ware).

In the 13th to mid-14th centuries a greater array of pottery types from around Eastern England and from further afield was present in all parts of the study area, but particularly perhaps in the south Cambridgeshire upland and Cambridge. Cambridge’s assemblage includes a large volume of sandy coarsewares, some of which, particularly the micaceous fabrics, were made in Essex, whilst others were either manufactured in the town or derive from pottery kilns located on the Bedfordshire–Cambridgeshire border (Early Everton-type ware). New wares in central Cambridgeshire include an oxidised sandy ware (West Cambridgeshire Sandy ware), that has been recognised in Cambridge but was made close to Bourn where it was very abundant, and a fabric very like that of the kilns at Colne (Colne-type ware from Caxton and Bourn). A new medieval fabric from Colne was identified (Colne Medieval ware), and previously published fabrics were re-classified and given revised dates (Late Medieval Colne ware). At Huntingdon, pottery production evolved into a major new ware type (Huntingdonshire Fen Sandy ware), previously classified as an Ely-type ware. A corpus has been established for this new type and, as far as possible, its distribution has been traced. Ely ware production flourished and its products were initially supplied to Lynn, but after the growth of industries local to north-west Norfolk, Ely pottery was increasingly moved to Cambridge and the fen edge. Near Ely a further local ware was manufactured (South-east Fenland Medieval Calcareous Buff ware) that had a narrow distribution in Cambridgeshire but appeared to be distributed to the Suffolk fen edge and was common at Bury St Edmunds, upstream on the River Lark. At Peterborough locally-made shelly pottery was more common than previously, but the kilns at Baston and Bourne in south Lincolnshire, producing both shelly and oolitic coarsewares, and sandy glazed wares, became very dominant. Pottery supply to the upland and fen edge included a significant component from kilns in the Rockingham Forest of Northamptonshire, principally Lyveden A ware and Lyveden–Stanion glazed vessels. Glazed finewares were imported from many locations in England, but the most commonly found types tend to be from north Essex (Sible Hedingham glazed ware) and also Colchester, Harlow and Mill Green in the same county. Some of these products are grouped with pottery from Suffolk into the ‘East Anglian Redwares’ category. The pottery from northerly parts of Essex appears to have been moved overland to Cambridgeshire. In contrast, those wares made much further away and/or commonly found in London were probably distributed by water via the coast, King’s Lynn and the fenland rivers.

The late medieval period saw a reduction in the number of producers supplying the study region. Much pottery in the Late Medieval Reduced ware tradition was imported from counties to the west and in addition late medieval pottery was made at Ely (Late Medieval Ely ware), while a 14th- to early 15th-century fabric was made in Huntingdon (Huntingdon Late Medieval Calcareous ware) that shows stylistic development from the previous products from the town. Pottery was made at Colne, both in a late medieval reduced-type fabric (Late Medieval Colne ware) and in Colne C ware that is visually almost identical to pottery from Bourne in Lincolnshire in both fabric and forms; a link between potters at the two production centres has been postulated. In both this and the preceding period it seems probable that pottery supply across the fenland from Lincolnshire was distributed through the Nene system, both towards the fen edge and seawards, the latter including March on the way towards King’s Lynn. This network appears to have been quite separate to that of the Ouse–Cam system through which the Ely products were distributed. Pottery from Northamptonshire reached the fen edge and northern fenland via the River Nene to Peterborough and overland to Yaxley. Peterborough’s assemblage was heavily dominated by pottery made at Bourne and Baston in the high medieval and late medieval periods. Redware production started in Ely in perhaps the later 15th century, and subsequently evolved into a larger industry. 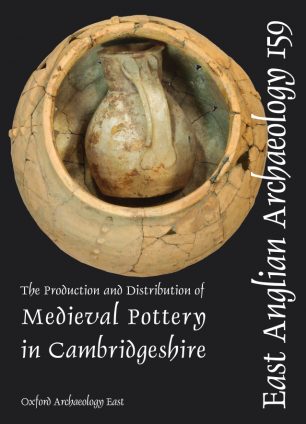