Excavations by Archaeological Solutions Ltd, on a south-facing clay hillside above the river Gipping in Mid Suffolk, revealed the remains of a farmstead dating from the late Iron Age to the mid 4th century AD.

The late Iron Age (Phase 1) settlement comprised two ditched enclosures with associated roundhouses and other features. Three of the roundhouses were set within the southern enclosure, only two sides of which were apparent, while a further two were located in the northern, roughly square, enclosure; a further roundhouse stood in apparent isolation to the north of this. Four-post structures, thought to have been used for the storage of plant-based foodstuffs, were mainly located well away from the settlement enclosures in a separate area defined by two large parallel boundary ditches.

In the early Romano-British period (mid 1st to mid 2nd century AD; Phase 2) the northern enclosure was converted to agricultural use; a system of parallel linear gullies, likely to have been associated with arable farming or horticulture, was laid out here and also across the upper slopes of the adjacent hillside. Settlement continued within the southern enclosure, with the enclosure ditches being re-dug and new buildings put up (roundhouses and a rectangular post-built structure). There was little evidence of contemporary activity in the eastern part of the site but some of the four-post structures in this area are likely to date to the early Romano-British period.

Between the mid 2nd and mid 3rd century AD (Phase 3), occupation continued to be focused on the southern enclosure, which had by then been surrounded on three sides by a system of small ditched enclosures and paddocks. Three buildings (a three-roomed domestic building and two bathhouses) were constructed partly in stone, along with rectangular timber structures of posts set in/on sill beams; two roundhouses were also built early in this phase. This period also saw the establishment of droveways and a stock-handling area in the eastern part of the site. The upper slopes of the hillside are thought to have remained in agricultural use.

The farmstead’s principal buildings fell into decay or were demolished in the late 3rd or early 4th century. However, despite the absence of recognisable new structures, the site continued to be occupied. Later Roman activity (late 3rd to mid 4th century AD; Phase 4) was represented mainly by finds-rich occupation layers which had only survived truncation from modern agricultural activity where they lay in natural depressions or in the tops of earlier features which had not completely filled in. The associated pottery and, particularly, the coin assemblage (the overwhelming majority of which came from a single late Roman layer overlying a large pond), indicate that the site continued to be occupied until around the middle of the 4th century. The site thus fits in with the picture emerging from other late Roman rural sites in East Anglia, where cut features are rare but continuing occupation is nevertheless represented by surface spreads of dark earth containing 3rd- and 4th-century cultural material. 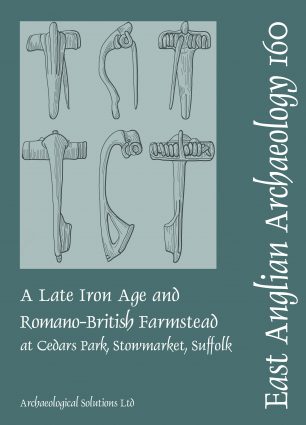