Seven discrete areas of land were excavated by Archaeological Solutions to the north-east of Stowmarket in Mid Suffolk, on the clay hillside above the river Gipping. Excavations took place between 2004 and 2011 before construction of the Cedars Park residential development. Four phases of medieval and post-medieval land use were identified; the main period of activity was in the 13th–14th centuries AD.

To the north of Cedars Park, where the hillside levels off to a plateau, excavation revealed part of an enclosed farmstead. The remains of two buildings with earth-fast foundations were identified, as well as cobbled yard surfaces, numerous quarry and rubbish pits and a large pond or watering hole.

On the lower slopes to the south-west was an area of roadside settlement marked by regular property boundaries/drainage ditches either side of Creeting Road. The direct relationship between the road and the medieval boundary ditches demonstrates that it was in use by the 13th century if not earlier. Because the excavation areas were set back slightly from the road, evidence of dwellings was absent. However, the rear areas of several roadside tofts, containing cobbled yard surfaces and the remains of barns or other agricultural buildings, were revealed. Scattered pits containing quantities of pottery, animal bone and other domestic rubbish attested to occupation close by. Field name evidence indicates that the settlement lay on the edge of a green which had been enclosed by the early post-medieval period. It is likely to have been directly associated with the medieval manor at Thorney Hall, 250m to the west. To the east of the site, close to Sheepcote Hall, was a small double-ditched stock enclosure which is thought to have been used for corralling sheep, with another area of medieval roadside settlement nearby at the junction of Creeting Road and Mill Street.

Cedars Park was probably settled under the favourable environmental conditions of the 12th and early 13th centuries, at a time of rising population. The spread of small, dispersed settlement sites across the landscape was also a result of the gradual breakup of the large late Saxon royal estate of Thorney into a multitude of separate manors. The reasons for the abandonment of much of the site around the mid 14th century are unknown but the Black Death and subsequent outbreaks of plague, and the difficulty of farming the local clay soil in the worsening climate of the 14th century, may have played a part.

The enclosed farmstead can be tentatively identified with a tenement documented in the records of Thorney Hall manor court, which was owned by one William Le Newman until its abandonment in c.1340. At the end of the 14th century, the green-edge plots were probably held by one Geoffrey Atte Grene. By 1408, Geoffrey’s tenements had passed to Thomas Mysterton, a gentleman, who is unlikely to have occupied them himself. Changing patterns of land ownership therefore contributed to the final abandonment of this part of the site. Subsequent agricultural land use was represented by a series of field boundary ditches which closely matched those recorded on the 1839 Stowupland tithe map.

The dispersed medieval settlements at Cedars Park were occupied by people of relatively low status, with little evidence for specialised agricultural or craft production and few signs of wealth. Mixed farming with an important pastoral component produced enough food for their subsistence and a modest surplus with which they were able to purchase pottery and other commodities at local markets; most items found at the site were produced within a thirty-mile radius. Similar small farms and roadside or green-edge settlements were typical of the medieval landscape of the Suffolk, Essex and Norfolk claylands. However, while these types of dispersed settlement are well known from documentary records and field survey, very few have been subject to modern open-area excavation and the recovery of detailed structural, economic and environmental evidence. 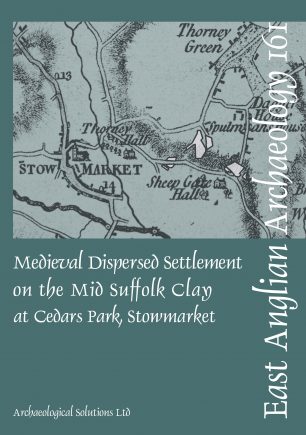