Love’s Farm lies on the claylands near the western boundary of Cambridgeshire. Fieldwork conducted over 60ha by the county field unit, CAM ARC (now Oxford Archaeology East), followed geophysical survey, fieldwalking and evaluation. This extensive project permitted a detailed archaeological examination of a later prehistoric and Roman agricultural landscape on a previously unprecedented scale within the county.

Evidence was revealed for the exploitation of the area in early prehistory, with field systems present from the middle Iron Age, if not before. By the late Iron Age, several farmsteads were set within what may have been three ‘landholdings’, bounded to the south by a major routeway previously identified as a possible Roman road. Dominant features were a large square enclosure and a later circular monument, positioned on a ridge overlooking the settlements. Given its location close to major routes, the site was ideally situated to provide evidence for the impact of the Roman conquest and the influence of Romanisation on the countryside. Although little trace of the disruption of everyday life was noted, metalwork with military associations was found. Many of the finds show a distinct bias towards votive offerings, providing new insights into local religious observance.

At around the time of the conquest, the minor farmsteads fell from use and activities eventually coalesced into two settlements: one which developed from an Iron Age farm and the other effectively a ‘new’ foundation that burgeoned in the 4th century. The older of the two settlements was abandoned in the late 4th century, while the other apparently remained in use into the early Anglo-Saxon period. The site eventually became medieval fields, although some of the ancient hedgerow boundaries survived.

This publication seeks to illustrate the site’s character and to examine its social, economic and morphological development in its wider context. The archaeological remains unearthed at the site link to a wide range of issues that have the potential to enhance current understanding of social organisation and the evolution of the countryside. The results shed significant new light on the past of this previously little-known part of the Cambridgeshire landscape that was once thought to be cold, wet and uninviting. 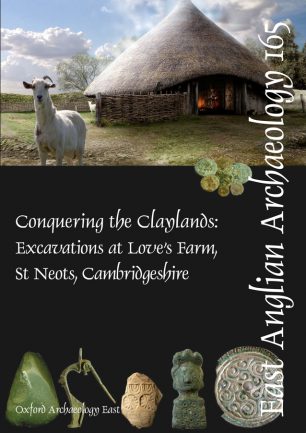