Excavations by Cotswold Archaeology at Mildenhall produced evidence for human activity from the Late Bronze Age to the medieval period. A Late Bronze Age waterhole backfilled with domestic refuse was excavated on the higher ground above the floodplain of the River Lark. The Middle Iron Age was a period of intense activity on the site, when a pair of massive ditches defined the eastern part of an enclosure, possibly built to dominate the crossing point of the River Lark. A third ditch of comparable size may date to the Middle or Late Iron Age. Numerous pits were found inside the enclosure, and a pair of very large post-settings was located between the ditches. A possible focus for settlement beyond the excavated area was suggested by the greater density of pits towards the west. The ditches fell out of use before the Roman period when a farmstead occupied the higher ground. In this period the flood plain was utilised with a series of field ditches, although the area was prone to flooding in the later Roman period.
Throughout the Saxon period, the higher ground was farmed and use of the flood plain was limited by the wet environment. The evidence suggests there was a process of deliberate land reclamation on the floodplain during the medieval period, after which the area was divided into fields. On the higher ground, a large ditch running north to south may have marked the medieval town boundary, but this association is uncertain. Excavated evidence from this period represented activities undertaken on the periphery of settlement, including crop-processing, animal husbandry, and iron-working. A well-preserved kiln base may have been used for the production of lime, using chalk quarried from the edge of the higher ground. There was a rapid decline in use of the area from the 14th century onwards, and it remained farmland until recent times.
There was good preservation of environmental evidence from all periods, and the sizeable assemblages of animal bone and crop waste allowed comparisons to be made in farming practices over time. The assemblage of decorated Middle Iron Age pottery from the site is the largest found in the region to date. 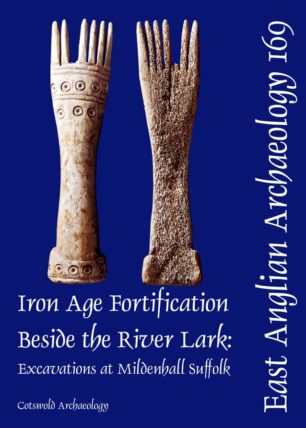