Excavations took place at Rectory Farm, Godmanchester when gravel quarrying extended over an area in which aerial photography had revealed Roman buildings and a wealth of varied cropmarks. The site emerged from the investigation as a complex multi-period landscape containing archaeological remains of considerable importance.

The earliest activity was a large Early to Middle Neolithic trapezoidal enclosure located on the gravels of the broad flat Ouse Valley – an area rich in archaeological monuments. A series of twenty-four large posts were arranged with great precision and were enclosed by a continuous ditch and internal bank with an ‘entrance’ on one side. A small mound further west evidently served as a viewing point for the enclosure. Radiocarbon analysis dates the use of the enclosure to 3685–3365 cal BC (95% probability).
A Middle to Late Neolithic ‘cursus’ ran 0.5km to the south-west, where it disappeared beneath modern Godmanchester. A Bronze Age funerary mound lay to the north and both this and the earlier mound were later used for Roman burials.

A Roman villa farm developed adjacent to the Neolithic enclosure in three identifiable phases, linked by road to the Roman town of Durovigutum (Godmanchester). At first (late 1st to 2nd century) an aisled building was associated with minor structures and a pond, long ditched enclosures, and a mixed inhumation/cremation cemetery. New buildings were erected in the 3rd century and the aisled structure was re-used for crop-processing. Environmental remains from an infilled pond suggest the presence of plant and tree species reminiscent of a Mediterranean style garden. A substantial timber-framed building (probably a barn) lay within a developing field system, while a granary lay in its own enclosure closer to the main buildings. A new aisled building was paired with the first, and joined by a corridor to a third building – a long hall with impressive stone-built footings, which may have been residential. The latest building in the sequence was a high status rectangular hall-type structure, with underfloor heating. Three substantial wells nearby contained painted wall plaster, tesserae and a large column capital. The discovery of a finely made cockerel figurine within one of the wells may indicate an association with the god Mercury. Environmental evidence combines with archaeological features to suggest that this latest building was associated with a small courtyard garden, while the presence of numerous honey bees may indicate that hives were present nearby.

By the early 5th century, the buildings were derelict, but although settlement had ceased the land remained in agricultural use until gravel extraction and landfill took place in the late 20th century. 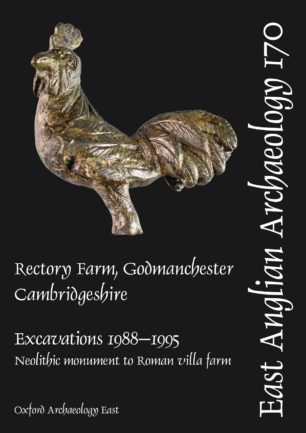