Norfolk has a rich heritage of prehistoric metalwork from the daggers of the Early Bronze Age to the late pre-Roman Iron Age treasures of Snettisham. In recent years relatively little has been written about the Bronze Age metalwork. Individual classes, such as swords, have been recorded in Prähistorische Bronzefunde while depositional practices have been explored in a number of theses, building on earlier classification of hoards and other assemblages going all the way back to the work of Sir John Evans in the late 19th century. Weapon assemblages and their deposition have more generally been a focus of attention, especially in relation to the ritual use of water and wet places, and regional biases in distribution have been noted when compared with other classes of hoard. More recently particular attention has been paid to the practical use of weapons and their condition at deposition, quantifying combat and other damage.

The discovery of three roughly contemporary Late Bronze Age weapon assemblages from north-west Norfolk provided the opportunity to combine a range of archaeological and technological approaches to their characterisation and interpretation. A full compositional, metallographic and radiographic study of the assemblage from Waterden was linked with an assessment of combat and ritualised damage and with the more traditional archaeological approaches of typology and chronology to enhance our understanding of some important aspects of Late Bronze Age life and society. The results from Waterden are supported by archaeological field investigation, and serve to illuminate the two smaller finds from Fincham. 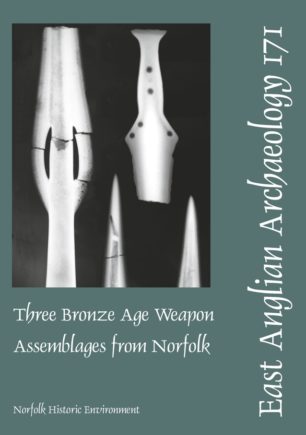