Construction of the Peterborough Eastern Bypass led to the excavation of a burial mound and the discovery of a complex burial and ritual site, which lay in the Nene valley on the north bank of an old course of the river. The site was effectively sealed under alluvial deposits accumulating over the last thousand years, and almost untouched by any post-medieval disturbance. A round barrow, found by David Hall in the 1970s, was a slight bump in the flood meadows, scarcely 0.25m above the general level. When archaeological excavation began, a change in the vegetation nearby proved to be another, older, burial monument. Work was intermittent, held up by lack of funds and only completed under a government unemployment scheme.

Both burial sites span the period from the Neolithic to the Middle Bronze Age with evidence that they shared a sequence of development. Iron Age weaponry and currency bars were recovered from the old course of the river Nene and there was evidence that ritual or religious practice continued at the barrow into Early Saxon times. The focus of the cult may have been the tidal effect on the Nene.

Cultivation in open fields up-stream during the Late Saxon and Medieval periods led to silting of the valley bottom, almost completely covering the burial mounds, the process coming to an end progressively through the eighteenth century. 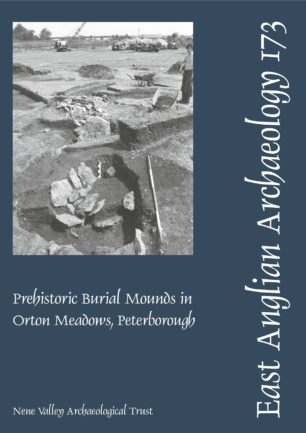