The faunal assemblages from all four periods were composed primarily of cattle, caprines (sheep and goats), pigs, and domestic chickens. Horses were few in number and do not seem to have formed part of the diet after the Middle Saxon period. In terms of NISP (Number of Identified Specimens Per taxon), cattle are always the most numerous animals, followed by pigs and then caprines, but the relative number of caprines increases throughout the Middle Saxon, Late Saxon and Medieval periods. Domestic chickens greatly outnumber domestic geese in all periods. Wild birds and mammals are rare in all the Ipswich assemblages. The most common wild species are red deer (Cervus elaphus) and roe deer (Capreolus capreolus).

Biometrical data show that the Middle Saxon cattle are comparable in size to the cattle from other Middle Saxon emporia in England. These data also suggest that fewer oxen were sent to market in the later periods and that there was a slight overall decrease in the size of cattle by the Early Medieval period. The Middle Saxon sheep from Ipswich are small and comparable in size to the Middle Saxon sheep from rural East Anglian sites such as Brandon in Suffolk. All the Ipswich horses are the size of large ponies; most are between 130 and 140cm (about 13–14 hands) in withers height. The dog remains from the Late Saxon and Early Medieval contexts in Ipswich include dogs of a range of different sizes. The smallest are about 30cm at the withers, the largest are about 50cm.

Ageing data indicate that Ipswich was supplied with market-aged and older adult cattle, sheep and pigs. Elderly animals and very young animals are rare. These data suggest that the inhabitants of Ipswich obtained their meat from markets throughout the Middle Saxon, Late Saxon and Early Medieval periods. 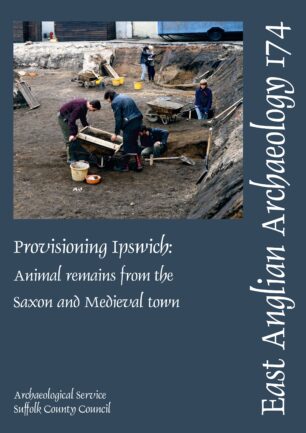