The Crownthorpe hoard was discovered in 1982 during a metal detector search of a Roman temple site. It consists of seven bronze vessels: native copies of two Roman silver wine cups and a spouted strainer bowl, together with an imported Roman saucepan, patera and a pair of dishes.

The cups are copies of plain silver vessels of form Eggers 170, and may well have been made in a workshop in Norfolk. They are the only complete examples of insular copies of Roman wine cups from Britain. Copies of Roman wine cups were made in the east of England from before c. 25 BC. Some of these local imitations were inspired by imported cups that have not survived in the archaeological record. Bearing in mind that no imported silver plate is known from late Iron Age Britain after c. 10 BC, insular copies of wine cups show that more silver plate reached Iron Age Britain than we have hitherto realised. Confirmation comes from images of Roman silver cups on Iron Age coins. The spouted strainer bowl was made in a workshop to the south or south-west of Crownthorpe, somewhere in the counties north of the lower Thames. Such vessels are an insular type that owed nothing significant to the Roman world. They were used primarily for flavouring local drinks. A corpus of thirty such copper-alloy vessels is provided in this report, including three examples that reached the mainland of Europe.

The Roman saucepan in the hoard is an Eggers 151 Trau-Kasserolle type. They are rare finds: Crownthorpe is only the fourth example from Britain, and the only complete one. It came from a workshop along the Rhine or Danube frontiers. The patera is Italian and part of a set of hand-washing vessels; the jug that would have been used in conjunction with it was not present in the hoard. The two dishes have tinned inner surfaces and represent a long-lived Roman vessel type.

The hoard components were assembled at Crownthorpe c. AD 40–75. Relating the hoard to the local context suggests that the date can be narrowed down to c. AD 45–60/61. It was buried by a Briton, a member of the local Icenian elite.

The set of vessels at Crownthorpe was used for preparing and serving local ale or mead that was flavoured with fruit or vegetable additives, and drunk from the cups. Wine amphoras are seldom found in late Iron Age and early Roman Norfolk, and that precludes the use of the Crownthorpe cups for the drink. As there are two cups, we should envisage their use for the host and a guest. The Eggers 151 saucepan was used to ladle the drink into the strainer bowl for its flavouring. Snacks to accompany the drink were served in the two dishes. Handwashing in the course of these revelries was facilitated by the patera.

Burial of the hoard near the site of a later Romano-Celtic temple with no trace of an organic container to facilitate recovery suggests it was votive. Other base-metal utensil hoards from Roman Britain cannot be satisfactorily accounted for as the temporary concealment of portable wealth with the intention of recovery, and strengthen the case for Crownthorpe being votive. No comparable hoards are known from late Iron Age Britain because few copper-alloy utensils were in use then, but we know that the practice of burying such hoards had its roots in a native tradition because single copper-alloy vessels have been recovered from watery contexts in the late Iron Age. Components of the Crownthorpe hoard had been dismantled when it was buried, but it should not be seen as a hoard of scrap metal intended for recycling. It is proposed instead that the termination of the useful working life of these vessels represents an act of renunciation, in this case a repudiation of Icenian dealings with the Roman world that culminated in the calamity of the Boudican Revolt of AD 60–61. 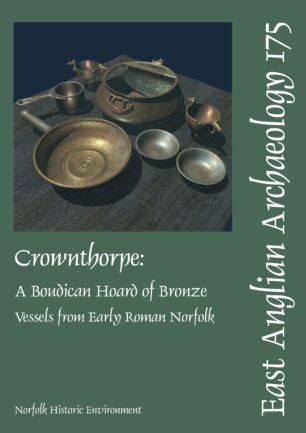