The results presented here concern an intensive fieldwalking survey by the author of one civil parish, Fransham, formerly the two ecclesiastical parishes of Great and Little Fransham, lying near the western edge of the Boulder Clay plateau in rural Norfolk. To set the archaeological evidence for the medieval and post-medieval periods into their agrarian, manorial and tenurial contexts, exhaustive use was made of a fairly rich body of available documentary sources.

The earliest material recovered belongs to the Lower Palaeolithic but great emphasis is placed on the Middle Ages and the early post-medieval periods during which both archaeological material and documentary evidence are most informative. No period has provided results that are in any way exceptional, though a few surprises, especially in the prolificacy of some forms of evidence, were forthcoming. It is hoped, however, that the near-complete coverage of the study area and the consistency of collection methods have furnished a more accurate and fuller account of human activity in this parish than has usually been possible in others.

Such widespread and sometimes quite dense scatters of Neolithic and Early Bronze Age worked flint were unexpected in this zone of predominantly heavy soil, as was the surprisingly large number of probably contemporary ploughed-out burnt mounds or ‘pot boiler’ sites. By contrast, Iron Age and Roman settlements were unremarkable in both their scale and frequency, and, indeed, far more impressive sites on similar soils have recently been recorded close by in Norfolk, and elsewhere. The Anglo-Saxon period has produced two unforeseen results: an Early Saxon settlement and probable cemetery close to the site of a medieval parish church, and a Middle Saxon settlement at some distance from it. The fission into what were to become the two medieval parishes of Great and Little Fransham probably began in the ninth century, and tentative movements from the two major Late Saxon settlements to the edges of some of the extensive areas of common pasture took place before the end of the eleventh century.

Manorial arrangements were reasonably straightforward at Domesday, when there were three holdings, though one was split with another in Rougham, a geographically quite separate place. By the late thirteenth century matters had become very complex and this intricacy is demonstrated, for Great Fransham at least, by copies of a feodary of c.1279. Written sources, most of which post-date the fourteenth century, have proved most useful in elaborating the histories of individual settlements that survived into post-medieval times. Documents have been less helpful in providing an understanding of the organisation of communal agriculture, though they do indicate there was a low level of regulation. They have, however, in the absence of early maps been crucial in locating areas of land-use, common fields, several closes both demesne and tenanted, meadows, common pastures, roads and paths. Therefore, a considerable amount of space is given to a topographical description of the study area.

In the Middle Ages most houses were dispersed around the edges of common pastures, though in some places they were so densely packed that they should best be seen as small nucleations. Archaeological evidence demonstrates a high point in the number of settlements in the thirteenth century followed by a drastic reduction during the fourteenth and then few signs of recovery until the sixteenth. During the following two centuries there was little change in either the pattern or intensity of settlement. 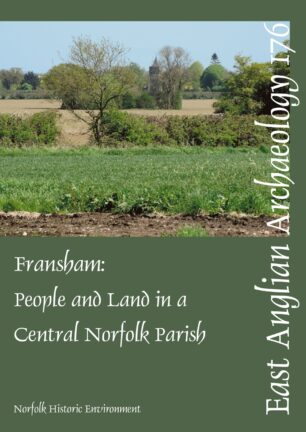