This volume is the second in a series that will cover the extensive and significant archaeological deposits recorded in the main quarry and two subsequent isolated extensions. The river terrace gravels of lowland Britain have historically provided a rich source for mineral extraction and aerial photography can often be the only surviving record of large tracts of archaeological landscape that have been destroyed during the quarrying process before it became the legal responsibility for the quarry operators to provide for archaeological work. Clearly, these multi-period landscapes are a finite and dwindling resource and it is essential to glean as much information as possible in advance of their development-led destruction. The significance of the Flixton Quarry site is not necessarily that the archaeology is unique, indeed the aerial photographs often suggest a similar range of both funerary and settlement/occupation activities are present, but the opportunities to excavate such large areas do not often occur.

The format chosen for publication is essentially a product of the phased nature of the project and the fact that Volume I (Boulter and Walton Rogers 2012) was largely funded by an Aggregates Levy Sustainability Fund grant. Volume II includes features and/or structures of prehistoric, Late Iron Age/Roman, Early Anglo-Saxon, medieval and post-medieval date.

The extensive prehistoric archaeology in this volume is dominated by monumental structures of the Early Neolithic (long barrow) and Early Bronze Age (ring-ditches), presumably all having a funerary function, although not all were associated with burials. There were also small clusters of unurned cremations of Middle Bronze Age date, a period which may also have seen the initiation of an extensive rectilinear field system. Also present were domestic/occupation deposits of later Neolithic/earlier Bronze Age, Late Bronze Age and Early Iron Age date. Structural evidence of the Late Bronze Age included both circular timber buildings and four- and six-post, square and rectangular structures, while those of Early Iron Age date were limited to four- and six-post structures.

The Iron Age/Roman archaeology saw a continuation of that documented in Volume I. The activity spanned the later Iron Age through to the 4th century, although the 1st and 2nd centuries AD were particularly well represented. Significant features included three post-built structures, probably representing large granaries (horrea), two pottery kilns and a multiple burial, the latter dated artefactually and by radiocarbon dating to the 1st century AD. A small number of metalwork finds hinted at military contact at this time.

The Early Anglo-Saxon period is represented at Flixton by two burial grounds and a settlement; the cemeteries (Flixton I and Flixton II) were presented in Volume I while the settlement is considered here in Volume II. Structural evidence included post-built ‘halls’ and Sunken Featured Buildings (SFBs), along with pits and, possibly, ditches. Artefactual dating suggested that the occupation was broadly contemporary with the previously excavated cemeteries and may have been directly associated.

Medieval features were rare, limited to part of a rectangular enclosure with an entrance to the south that contained a small continuous square enclosure with a central pit. Post-medieval deposits were dominated by ditched field boundaries many of which could be related directly to map evidence and to the farmland and the park surrounding Flixton Hall. In addition, a complex of WWI training trenches and associated latrine pits were recorded.

When complete, the Flixton reports will provide a detailed study of the development of this particular type of river terrace gravel landscape from as early as the Upper Palaeolithic/earlier Mesolithic (with an in situ flint scatter recorded in a recent quarry extension, protected in a hollow filled with windblown sand), through to the modern day. Over time, the land has been used dynamically with evidence for shifting occupation and repeated funerary use. It will be suggested that the palimpsest of features recorded represents a relatively seamless continuation of human activity where, just occasionally, it is possible to see how actions separated by hundreds or even thousands of years have influenced later use of the landscape. 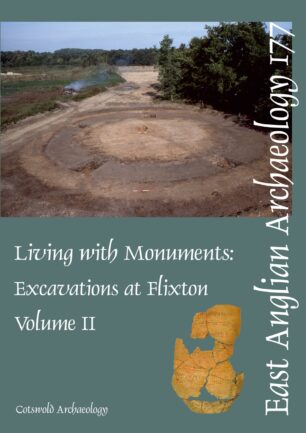