The motte was built sometime between 1066 and 1075, with a bailey to the south, and another to the north-east, probably of later date. Part of the north-east bailey ditch was excavated, and its function as a defended enclosure, ‘for the flocks and herds of the garrison’, was confirmed.
The underlying Saxon deposits included evidence for a timber stave church, and a graveyard of the late 10th and 11th centuries which contained at least 130 burials. Bone analysis has provided a lot of information about part of the Late Saxon population of Norwich.
The importance of the church and graveyard is assessed in terms of the Late Saxon topography, and the ecclesiastical organisation of the Late Saxon period is examined, to place this church in its proper context. 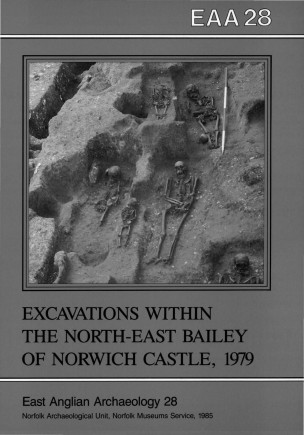