The first part of this report describes excavations carried out by R.R. Clarke, between the end of World War II and 1963.
They include a Romano-British enclosure of mid-1st century AD date at Thornham, re-occupied in the 2nd century and finally used as an Early Saxon cemetery. At Warham Burrows, Clarke excavated part of a Late Iron Age rectangular ditched enclosure. Close by, at Warham Camp, a section across the defences revealed details of the ramparts and the remains of a timber structure at the top of the inner bank. Excavations also showed that this Iron Age fort had been originally circular, with a possible south-western entrance, destroyed by the straightening of the river. At Wighton a further defended enclosure was investigated by Clarke, and shown to have been built in the century before the Roman conquest.
Thornham, Warham Burrows and Wighton are rectangular enclosures similar to others known from aerial photographs, and to the excavated enclosure at Gallows Hill, Thetford. They are all discussed as a group, examining their locations and their relationships to the Iron Age forts in Norfolk.
The second part of this report describes the Romano-Celtic temple at Caistor St Edmund, the excavations of which were initiated by Clarke. A cult-centre is suggested by its positioning inside a large temenos with a monumental gateway, also containing other buildings. 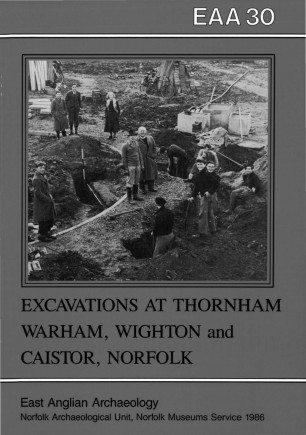