The programme of cropmark survey and research in Essex has identified many cropmark enclosures, often forming part of complex collections of cropmarks of different periods. Excavation has been used on selected sites to date the cropmarks and place the site into an archaeological context.
At Woodham Walter, limited excavation confirmed the postulated Iron Age and Romano-British date for the enclosures and also revealed earlier prehistoric occupation in the area. Although the excavation was small, a tentative series of phase plans have been produced for the cropmark complex. The site is considered in relation to other cropmarks in the Chelmer-Blackwater Valley, as part of the programme of landscape studies in the area.
The second part contains a gazetteer of all excavated enclosures in Essex, with a small selection of unexcavated ones. Each type is then discussed and summarised, with the intention of ascertaining how far the excavated sites help interpretation of the unexcavated ones. This is the first stage in the classification of enclosures, where all the evidence is assembled to facilitate a more analytical approach to questions of preservation or excavation.

Full reference:
David Buckley, John Hedges , Deborah Priddy, 1987. 'Excavation of a Cropmark Enclosure complex at Woodham Walter, Essex, 1976 and An Assessment of Excavated Enclosures in Essex together with a selection of cropmark sites', East Anglian Archaeology 33 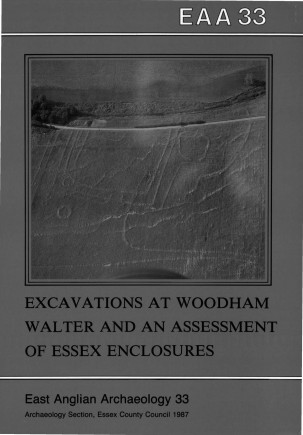