Excavation of this large waterfront site showed that it had been continuously occupied for nearly 1000 years, for commercial, industrial, and domestic purposes.
The remains of riverside structures, buildings and tenement boundaries dating to the 11th and 12th centuries, characterised the waterfront at the height of its commercial importance. Imported pottery indicated trade mainly with the Low Countries and Germany and to a lesser extent with France and Scandinavia.
About 1170 a stone warehouse was constructed, possibly by the Cathedral Priory. The undercroft survived to a height of about 2m, with windows, doorways, buttresses and a latrine turret. Very few stone buildings of this date remain in Norwich, and the importance of this example led to its preservation below the new Magistrates’ Court.
Particularly rich environmental material from waterlogged Saxo-Norman deposits allowed reconstruction of the local environment and the effect of human activity upon it.
Much information for later medieval and post-medieval use of the site was gleaned from documentary sources and archaeological evidence, allowing full discussion of topography, tenement history, building analysis, economic and social development. 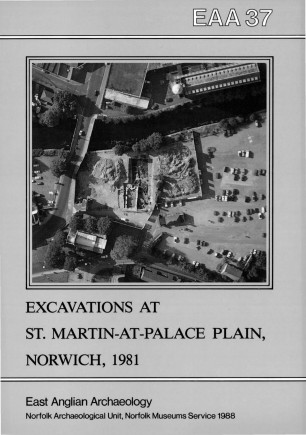