Burgh is the largest Iron Age fortification in Suffolk, still visible at ground level. Only two other sites in the county are broadly comparable, Barnham and Clare Camp, but the latter is not definitely Iron Age.
This report brings together the results of three periods of excavation, 1900–1901, 1947–1957, and 1975. The enclosure is bivallate, roughly rectangular and encloses 7 hectares. It was probably built in the 1st century BC as a minor oppidum — the regional centre and seat of a local chieftain with market, administrative and religious functions. It was destroyed about 15–25 AD. An inner enclosure of 1 hectare, was built in the north-west corner, probably just before the Conquest. This was occupied, either by an official or a noble until it was partly flattened about 60 AD. However, the enclosure was used well into the 4th century, as the centre of a villa estate.
The excavations discovered a selection of important finds, which included a good sequence of pottery, from the hand-made Iron Age wares to the Belgic wheel thrown wares, along with many Gallo-Belgic imports. These reflect the high status of the enclosure.
The conclusions place Burgh into context within Iron Age Suffolk, and discuss later settlement history based on the supposition that it became the centre of a Saxon estate. 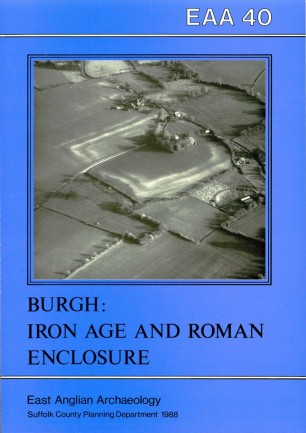