The discovery of the Thetford treasure (a spectacular hoard of late Roman gold and silver jewellery), a mass of late Roman finds from metal detecting and a striking multiple enclosure cropmark led to the decision to excavate 5ha of this site in advance of development.
The principal use of the site belongs to the Iron Age and Early Roman period, ending in the mid 60s AD. A series of hilltop enclosures dating back to the Middle Iron Age is replaced, at about the time of the Roman conquest, by a single substantial circular building within a double-ditched enclosure, surrounded by smaller peripheral enclosures containing possible graves. A rapid period of expansion follows as the main enclosure is massively enlarged, further circular buildings appear and the space between the inner and outer ditches is packed with rows of upright timbers. Most, if not all, of the extra-mural features are swept away. By the mid 60s AD the site had been dismantled — perhaps demolished in the aftermath of the Boudiccan revolt.
The major investment of resources over a relatively short time indicates the importance of this grand and unusual site. Evidence for agricultural production and domestic occupation is scarce, compared to metal-working debris, including coin moulds. The author argues that this exceptional site — in its final form a two-storied Romano-Celtic temple within an extensive ‘artificial oak grove’ — was a uniquely important religious, tribal and ceremonial centre for the Iceni. 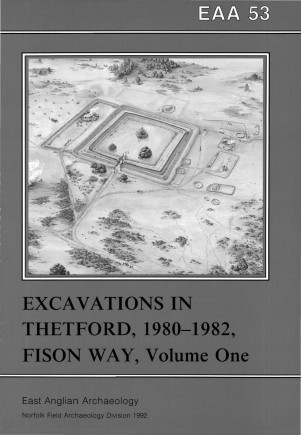