The Roman defended site at Caister, hitherto viewed as a small town, can now be seen as an early coastal fort probably contemporary with Reculver and Brancaster, both of which appear in the Notitia Dignitatum as forts of the Saxon shore. The Caister fort is of earlier Roman type, with a defensive wall backed up by an earthen rampart. Finds indicate occupation by cavalry from the early 3rd century to later 4th century, although specifically late military equipment is absent. The site was unoccupied until the Middle Saxon period, when outside the walls an extensive cemetery developed which was in use from the 8th to 11th centuries. Several burials containing rows of clench nails indicate that parts of boats were used as coffin lids or biers. Further burials were recorded within the fort itself, and both cemeteries exhibit Christian characteristics. It is likely that they were associated with a church, perhaps a minster. Was Caister, rather than Burgh Castle, Fursa’s monastery of Cnobheresburg? 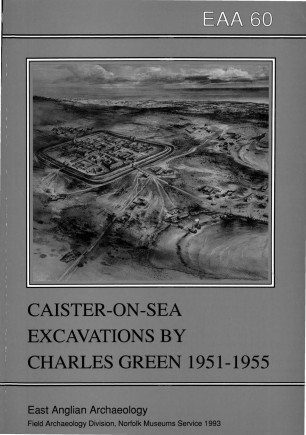