A number of sites excavated in advance of mineral extraction during the 1980s are described in this report.
The Early Bronze Age round barrow with an outer bank and ditch at Bawsey, near King’s Lynn, contained traces of a tree-trunk bier but no evidence of the body, plus a satellite burial and seven secondary cremations, one of which was buried beneath a complete, inverted collared urn.
A mound and a possible ring-ditch in the parishes of Longham and Beeston with Bittering were found to be of periglacial origin, but the range and quantity of prehistoric material recovered indicates settlement from the Neolithic to the Iron Age in an area where little has been recorded before. A prehistoric origin seems likely for the single ring-ditch at Lyng Easthaugh, seen as a cropmark on aerial photographs, although the results of excavation were inconclusive.
At South Acre, a ring-ditch identified on aerial photographs was found to be the levelled remains of a large, possibly prehistoric, round barrow. Later on, more than one hundred shallow graves were dug around the mound. These contained the remains of men, women and children, some apparently decapitated, which may be the remains of criminals executed during Saxon times. 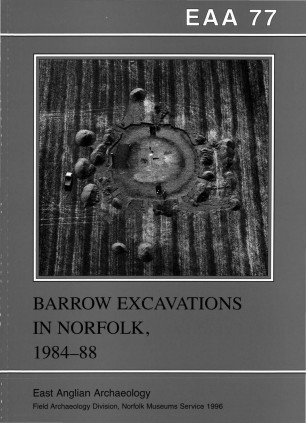