The initial occupation of the site dates from the Middle Iron Age, represented by pottery and a single building. In the Late Iron Age an enclosure containing a small building was constructed. During the Conquest period a larger triple-ditched defensive enclosure with a central roundhouse was constructed to the south-east of the initial enclosure. The ditches were rapidly backfilled but the site continued in use as a farmstead until the late 3rd or early 4th century. Throughout the Romano-British period the enclosure boundaries were altered, and new buildings added. By the late 1st century the roundhouse had been replaced by an aisled domestic building, this in turn being replaced in the 3rd century by a second aisled building. In the mid 3rd century, four pottery kilns producing coarseware were constructed within the enclosure. Occupation of the site in the Early Saxon period is evidenced by five sunken-featured buildings.
The archaeological features were well preserved and detailed post-excavation work has identified c.50 structures, including several previously unrecognised types of building.
Large quantities of ceramic finds related to the Romano-British pottery kilns were recovered, as well as Late Iron Age and Saxon assemblages. Notable among the finds is a group of Late Iron Age spearheads associated with the backfill of the defensive enclosure. 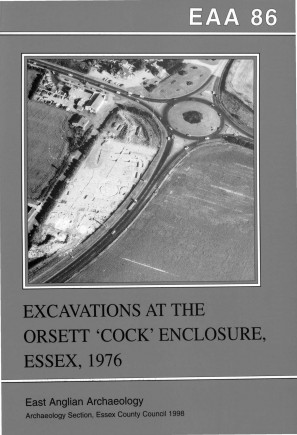