The site at Ivy Chimneys, Witham, appears to have been occupied continuously throughout the Iron Age, and remained in use until the end of the Roman period.
Most traces of domestic Iron Age structures were removed by ploughing, but the surviving ditches seem to indicate more than a simple farmstead. Very large, probably defensive, ditches of late Iron Age date may imply that the settlement at Ivy Chimneys was a focus of activity at that time, and a small amount of circumstantial evidence hints at a religious use for part of the site.
The nature of activity in early Roman times is unclear, although there is ample evidence for occupation of some form. The instigation of two large, long-lived, artificial depressions at this time may point towards the beginnings of Roman religious activity on the site. In the 3rd century AD a large, almost square, post-hole structure, interpreted as a Romano-Celtic temple, was constructed on the crest of the hill, and was enclosed by various ditches remnant of earlier activity. A large pond with a sophisticated water regulation system was constructed at about this time, and isolated timber columns may also have been present.
A new temple appears to have been constructed in the early 4th century, represented by a continuous ditch enclosing a sub-rectangular area. An adjacent depression contained votive material and may have been used for religious ceremonies, although a pottery kiln appears to have produced only conventional material.
The interpretation of a Christian phase in the mid-4th century is based on the presence of a baptismal font constructed of tile, and of a small two-celled structure, possibly a chapel. Other evidence may indirectly point to a pause in the pagan activity, but no specifically Christian portable objects were found.
In the late 4th and early 5th century the site was certainly used as a pagan shrine, as attested by numerous votive offerings such as coins and pieces of jewellery. There is no evidence for the date of the final destruction of the site, but the presence of a relatively high number of Theodosian coins suggests continued activity well into the 5th century. 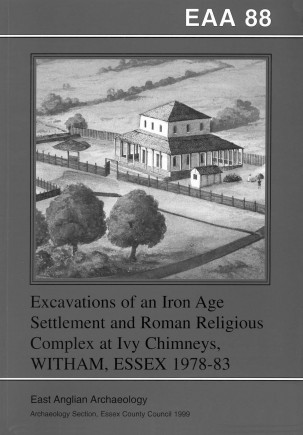