When mechanical ploughing was introduced on Felix Erith’s farm in the 1950s, fragments of Bronze Age pottery were brought to the surface. Wherever this occurred, Erith excavated, and in 1960 he published an account of his discoveries which clearly established the importance of the Ardleigh cemetery. The pottery, with its flamboyant decoration, became the classic Deverel-Rimbury ceramic of southern East Anglia.
A prolonged campaign of aerial photography revealed an extensive cropmark landscape of ring-ditches, trackways and enclosures. Further excavations in the 1960s by Erith with the Colchester Archaeological Trust revealed an Iron Age round-house, ‘Belgic’ burials and Roman kilns. In the 1970s investigations by the Central Excavation Unit were designed to examine the nature of the cropmark complex and to place the earlier work in context.
This book describes the results of both these campaigns. It provides an illustrated corpus of Ardleigh style Deverel-Rimbury ceramics, and an account of the evidence for a rural Roman pottery production centre in the hinterland of Colchester. The nature of the cropmark landscape, and the present condition and potential of the archaeology of Ardleigh are considered. 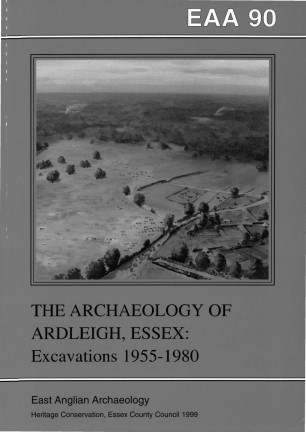