The Snape Anglo-Saxon cemetery stands in the Sandlings area of east Suffolk. The first recorded excavations on the site were conducted in 1862–3 by the landowner, Septimus Davidson and some friends. In trenching the largest barrow they encountered rivets, and by careful excavation were able to reveal the remains of a complete Anglo-Saxon ship burial, the first to be found in England. Although already robbed, they recovered a number of items including a gold Germanic finger-ring, now in the British Museum, which showed that the burial had been of the highest status. Their excavations also revealed a large number of Anglo-Saxon cremation burials. Subsequently the site was almost forgotten until in 1970 a dowser found an Anglo-Saxon urn in the field to the north of the road, and in 1972 a sewer trench excavated along the road yielded a further nine cremations, one in a bronze bowl (published by West and Owles, 1973).

In 1985 a research project was initiated under the aegis of the Snape Historical Trust. Excavations have shown the site to be a mixed cremation and inhumation cemetery. Amongst the inhumations, a wide variety of burial practices has been noted, including the use of two, and possibly three, dugout logboats as burial containers. Other graves made extensive use of organics, in some instances of textile, including the first observed use of Rippenköper weave in England (grave 37). The grave-goods were within the normal range of material to be expected in an Anglo-Saxon cemetery, more exotic finds including a lyre (grave 32) and a horse’s head with tack (grave 47). Finds show the cremation burials to date from the late 5th to 7th centuries, and the inhumations to date from the mid 6th to 7th centuries. Other features excavated included ring-ditches, some associated with inhumations, and six burnt stone features, apparently surrounding mound 4.

This report attempts to publish all the material known to have been excavated from the cemetery although the urns and their contents from the 1862–3 excavations have become dispersed over the years and many undoubtedly lost. The 1970 and 1972 finds have also been re-examined, re-drawn and are here republished. The final draft of the text was submitted by the authors in May 1998. 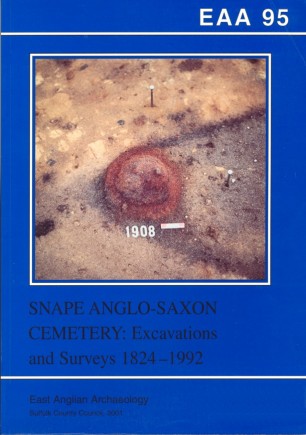